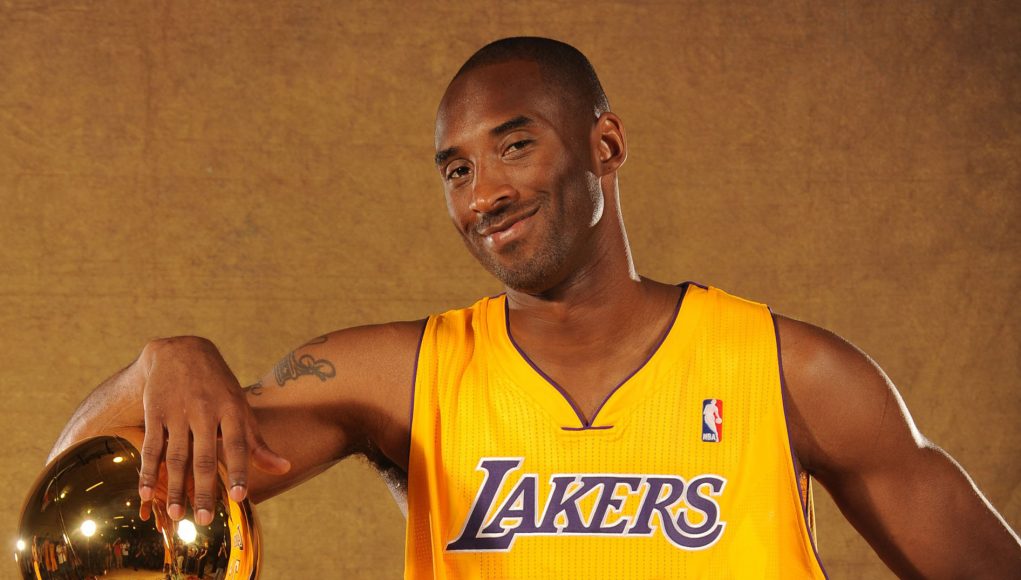 Kobe Bean Bryant was born on August 23, 1978, in Philadelphia, Pennsylvania. He took after his father, the former NBA player Joe Bryant, and fell in love with the game at the age of six. Kobe joined the basketball team of Lower Merion High School and led the team to the state championships four years in a row. He ended his high school career with 2,883 points as Southeastern Pennsylvania’s all-time leading scorer. Kobe Bryant’s net worth looked as bright as his future, as he received many awards for his outstanding performance during his senior years including Naismith High School Player of the Year and Gatorade Men’s National Basketball Player of the Year. 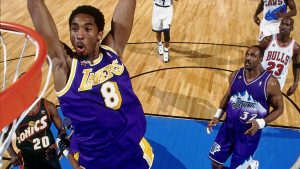 Despite his high SAT scores and good grades, Kobe Bryant decided to go straight to NBA instead of college. As the first guard to be taken out of high school in history, Bryant was chosen as the 13th overall draft pick by the Charlotte Hornets, and subsequently traded to the Los Angeles Lakers. The youngster debuted in the Summer Pro League in California scoring 25 points. As a rookie, Bryant became the youngest NBA starter ever, and he won the 1997 Slam Dunk Contest at the All-Star Weekend. In his second season, Bryant showed an exceptional game, becoming the youngest NBA All-Star starter in history. Bryant emerged as a premier guard in the league in the 1998/99 season. He also signed a six-year contract extension worth $70 million. His excellence in the game and incredible skills were often compared to those of Michael Jordan. Led by the legendary center-guard combination of Bryant and O’Neal, the Lakers won three championships in 2000, 2001, and 2002. Bryant made the All-NBA Defensive team in all three years.

In the 2002/03 season, Bryant averaged 30 points per game and set an NBA record for three-pointers, making 12 against Seattle SuperSonics. Once again, he was voted to All-NBA and All-Defensive first teams and reached the third place in the MVP Award voting. Despite his personal troubles due to his arrest for sexual assault, and the team not winning the championship, the 2003/04 season was also a successful one for Bryant. He extended his contract with the Lakers for another seven years. The next season witnessed a significant drop in Kobe’s overall status, and he was demoted to the All-NBA Third Team. However, the 2005/06 season noted a turnaround. He led the team back into the playoffs, and his individual accomplishments made the season the best statistical one in his career. The basketball magician scored a whopping 81 points against Toronto Raptors in 2006. He also became the first player since 1964 to score 45+ points in four consecutive games. Bryant ended the season and won the league’s scoring title, averaging 35.4 points per game. 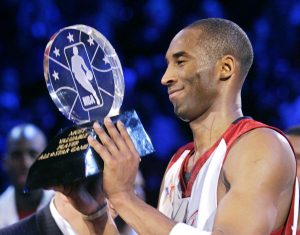 In 2007, Kobe Bryant became the youngest player to reach 20,000 points, a record that has since been broken by LeBron James. In the same season, he led the team to the Finals where they lost to the Boston Celtics. During the 2009 NBA All-Star Game, Bryant scored 27 points, four assists, four steals, and four rebounds, earning the All-Star Game co-MVP with O’Neal. Upon winning his fourth championship, Bryant was awarded his first NBA Finals MVP, averaging 32.4 points. He continued his dominant game in 2009/10 season and also became the all-time leading scorer in Lakers’ history. The Black Mamba signed a three-year contract with the team worth $87 million in 2010. Lakers won the Western Conference Championship and then won the NBA Finals. He was awarded his second consecutive NBA Finals MVP award. In 2011, Kobe Bryant became one of only seven players in history to have at least 25,000 points, 5,000 rebounds, and 5,000 assists. He made it to the 13th All-Star game where he scored 37 points.

Pursuing his sixth title, Bryant played extensively which resulted in a torn Achilles tendon and ending the season earlier. Playing without their key player, the Lakers were swept in four games by the San Antonio Spurs. He resumed playing in 2013/14 season, signing a two-year extension worth $48.5 million with the team. He was the first NBA player to play 20 years for the same franchise. However, the season came to an abrupt end for him due to another knee injury. The Black Mamba had his final game of the career at the Staples Center, dazzling the basketball world by scoring 60 points. 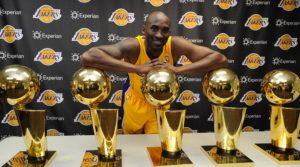 How much money has Kobe Bryant made in his entire career? The best basketball player in the world made $328 million from NBA salaries. However, a large part of his wealth came from his lucrative endorsement deals. Bryant has endorsed big-name products like Sprite, McDonald’s, Upper Deck, Ferrero, Russell Corporation, and more. He inked a six-year, $48 million deal with Adidas at the beginning of 1996/97 season. The Black Mamba also appeared in his own video games series by Nintendo. After the rape allegations, many sponsors stepped back, but Nike signed him to a five years contract worth $40- $45 million. The basketball magician signed a contract with Nubeo to market the ‘Black Mamba collection’ of sports and luxury watches. By 2007 it was estimated that his endorsement deals have an annual worth of $16 million. Kobe made approximately $352 million from his endorsements throughout his career. Together with his business partner Jeff Stibel, he has launched Bryant-Stibel venture capital firm aimed towards different businesses like media, gaming, data, and technology. He is also the founder of Kobe Inc. which owns and grows brands in the sports industry. So, how much is Kobe Bryant’s net worth?  As of 2017, Kobe’s net worth was put at $360 million.

The third highest earner in the NBA league loves to splash some money on luxurious goods. He bought a $4 million, eight-carat, purple diamond ring for his wife, Vanessa. He has owned several fancy cars, including a  $329,000 458 Italia Ferrari, a Lamborghini, a Bentley, and a Range Rover. The best basketball player of all times owned three houses at the same time, which were estimated at $18.8 million. Kobe Bryant’s house in Newport Beach was sold for $6.1 million. The 8,741 square-foot mansion had some luxurious amenities like a gym, a hair salon, a movie theater, and a wet bar. Kobe Bryant’s house also featured a custom shark tank and a wood-paneled library. Kobe Bryant’s new home is a $10.95 million residence in California which features modern and sleek interior design with marble floors. It also features a billiard room, a private theater, and spacious garden with a pool and fountains. 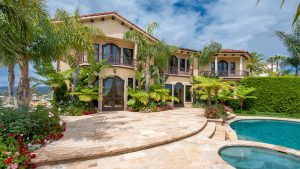 Kobe has also shown his big heart on many occasions. He has established the Kobe & Vanessa Bryant Family Foundation which helps to improve the lives of underprivileged youth and their families by providing financial resources and programs which enhance their opportunities. He’s also the ambassador for After-School All-Stars, a children’s charitable organization that provides after-school programs to inner-city children. Bryant has supported many other organizations like Aid Still Required, Cathy’s Kids Foundation, Make-A-Wish Foundation, Stand Up To Cancer, and the Vijay Amritraj Foundation.

Kobe Bryant’s net worth is a result of his two-decade hard work and dedication to the game. Becoming one of the best basketball players of all time, the Black Mamba is also the third highest-paid in the league’s history. His fortune will continue to grow as he’s now a successful entrepreneur and a great philanthropist. Find more celebrity net worth articles on CelebJury.